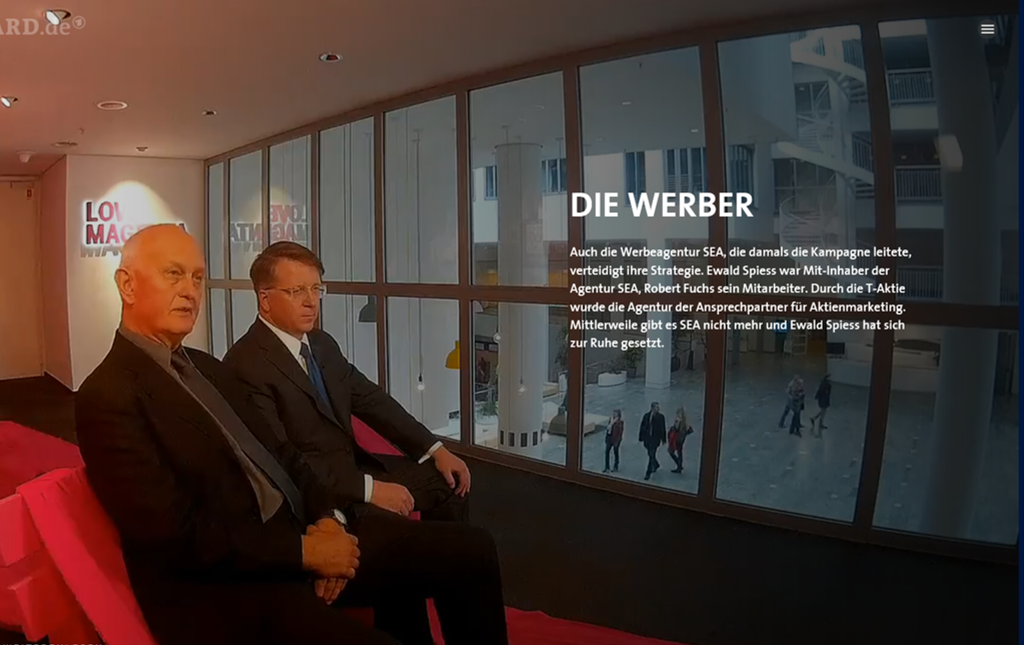 20th anniversary of the T-share: Ewald Spiess and Robert Fuchs reminisce on an ARD television program

As the long-standing lead agency of Deutsche Telekom, the predecessor agency Spiess & Ermisch designed the communications for the IPO in 1996 // The integrated campaign surpassed even the wildest expectations

On November 18, 1996, Deutsche Telekom AG, founded the year before, made capital market history with its newly issued share, known as the “T-Aktie” (T-share). With a systematic, very popular campaign, share marketing was conducted for the very first time in the history of this form of capital investment, and a share was offered as a branded article. In addition to numerous other activities, the actor Manfred Krug touted it with the slogan, “Deutsche Telekom is going public – and I’m going with it.”

Not only institutional investors followed him, investing in the future growth of the former Deutsche Bundespost Telekom, but more than two million private investors as well. In the end, the share was oversubscribed by a factor of five, and the volume in demand rose to DM 100 billion.

The development of the T-share was likewise a resounding success for many years. Then an era of upheaval arrived. International investors generally ignored the shares of telecommunications companies. The sharp rise of the T-share was followed by an equally dramatic drop, which robbed numerous investors of the will to invest in the shares. However, despite all the ups and downs, long-term investors ended up with a tidy three-digit profit overall.

What likewise remained was the memory of the strong, specific image of a brand whose corporate color enjoys a unique level of recognition in Germany. “Magenta” is a star in the communications industry. It is impossible to overlook in a program on the ARD stock market news division about the 20th anniversary of the IPO of the T-share and the interviews conducted with contemporary witnesses from the Bonn-based group and the two SpiessConsult executives Ewald Spiess and Robert Fuchs. You’ll find more information here.